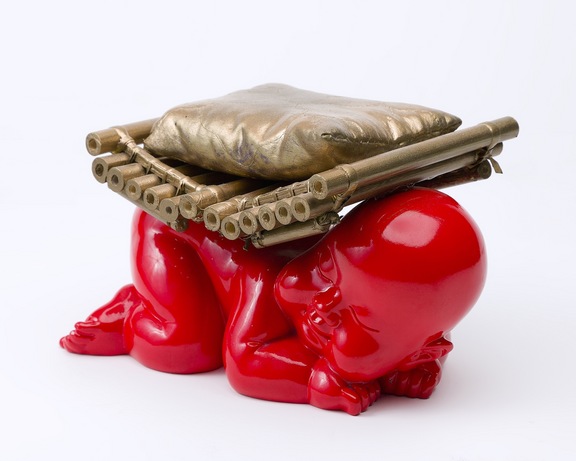 Leah Poller participated in the International Shanghai Contemporary Art Fair in November 2012. She heard about the Jiangxi Tongqing Metal Handicrafts Company in Nanchang and that it was only about an hours plane ride from Shanghai. Poller was going to the Nanchang foundry to have her work cast for the first time. Like many sculptors, Leah Poller had become frustrated with the economic environment in the West.  She was excited at the thought of an alternative to the escalating casting costs in the United States.

Paul Cavanagh representing our Asian affiliate, Sculpture Source Asia, along with his US educated translator, Dr. Wei Chan, escorted Leah Poller during the two day tour. Upon arrival at the airport, they were met by a car and driver from the foundry. They drove a half hour to Jiangxi where they were given gratuitous hotel accommodations by the foundry as is the custom for all visiting artists and clients.

Poller noted as she first left the car that “the entrance (was) framed by a sculptural world populated by Amazons. The grounds are peopled with 2 to 8 meters tall sculptures from Seward Johnson’s Los Mariachis to multiple size Buddha or paired dragons.” The three then went on a multi-hour walking tour of the Nanchang facility which Leah Poller described as “barely revealing the complexity and capacities of this foundry.” Jiangxi sits on 105 acres. The foundry consists of 405,000 square feet of workshops staffed by more than 700 employees.

Leah Poller said “the remainder of my afternoon was spent hiking through cavernous mold-making, casting and casing workshops and then through the smaller ateliers specialized in enlargements, wax molds, ceramic shell… In fact, the foundry is equally skilled in small works as well as large… I was left speechless as I viewed a seemingly endless line of massive works in progress that are commonplace to this foundry.  As, for example, 500 larger than life-size individually sculpted Buddha for a temple.”

Leah Poller has recently told Paul Cavanagh she doesn’t understand why there aren’t hundreds of artists taking advantage of the quality, craftsmanship and economic value that this fine foundry has to offer. Poller continues to utilize the facility for her pieces, as she has found herself “for the first time in my artistic career…envisioning my works in public places, 12 feet high, brought in under budget, on time and executed effortlessly. The compelling opportunity offered by the Asian marketplace had started to come together. The visit to Nanchang has opened up a floodgate of creativity and for me, ‘build it, they will come’  has become a reality.”

Any misconceptions of Asia and all it has to offer are evolving. There are many artists who are interested in China such as Poller, who is now flourishing. Contact us to find out how you can partake in the benefits of Asia.

Leah Poller wrote a blog about her time with Paul Cavanagh in Nanchang, China. To read her blog and see photos please visit

Leah Poller was born in Pennsylvania. She received classical training in sculpture at the prestigious Ecole Nationale Superieure de Beaux Arts, in Paris, France where she resided for 20 years.  Partaking of a rich, multi-cultural environment, Poller interacted with foremost members of the international arts communities of France, Spain, Italy, Mexico and Latin America, through her art and from her collaboration on the facsimile re-edition of the major Twentieth Century Art Publications (Revolution Surrealiste, Dada, Cercle et Carre, Cobra, etc.).  Returning to the United States in 1992, she established her studio in Soho and began the  “The 101 Bed Collection” which has been exhibited in galleries and institutions in Europe, Mexico, Asia and throughout the United States. Her figurative work, notably ‘Women Warriors” and the newest series “Sung Heroes” unites the classical and the surreal with a uniquely modern reinvention of the portrait. She has been featured on CNN, Fox Television and in numerous art publications. She has lectured extensively and held workshops on creativity. In 2002, she was named Director of “Intercambios de Arte y Cultural Internacionale”, a Mexican/American association furthering cultural exchanges between the Americas and spearheading the restoration of a major twentieth century mural from 1935, recently discovered to be the work of Philip Guston. Poller lives and works in Harlem.

To learn more about our featured sculptor, Leah Poller, please visit her website